I thought it would be fun to do profiles on the cats from the One-of-a-Kind Cat Book. With that in mind, here’s one on Abhisar the ‘cover cat.’ 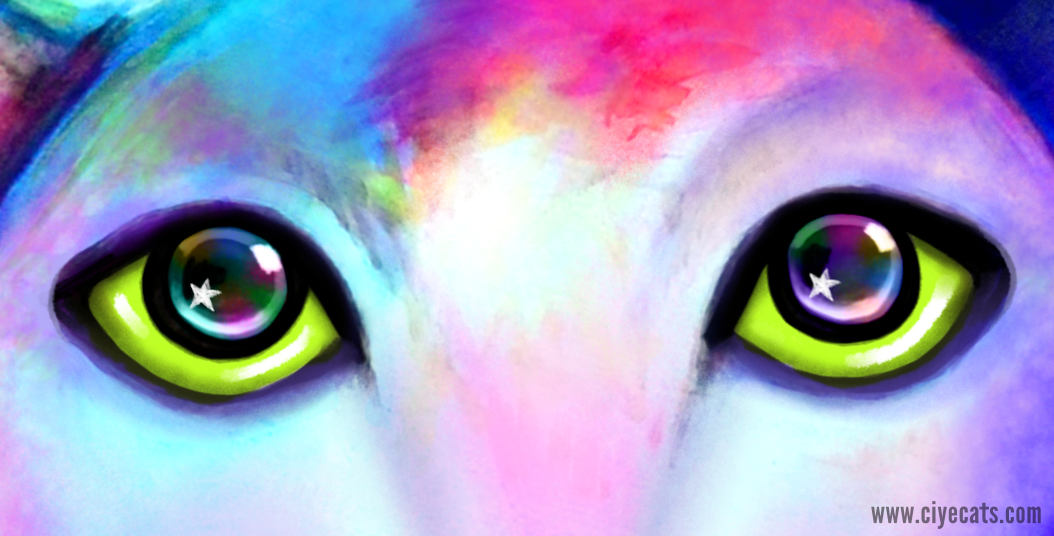 Abhisar is a white cat with yellow-green eyes. He lives in India and is the companion of a young backpacker named Chelsea. Together, Abhisar and Chelsea go sightseeing around India. The image of Abhisar shows him celebrating Holi, the famous color festival of love.

Inspirations behind the painting.

I’ve always been fascinated by pictures of the Holi festival. All that colored powder must be a sight to behold in real life. In all the pictures I’ve seen, the colors swirl and mire into psychedelic clouds.

I’d love to one day experience a color festival. Alas, my crowd phobia and eczema would probably make that difficult. I’m allergic to a lot of things (sand, seawater, chlorine) and anything ‘powdery’ could give me rashes. One fictional character who I can relate to is this dude:

Okay… so maybe I’m being a bit melodramatic. I won’t die if my skin touches fabric softener. And of course, cats don’t usually give me allergy problems (well, at least not the short-haired ones). Go figure.

Still, going to Holi would probably knock me out! Here’s a link to a Youtube video of some guy GoPro-ing at Holi.

I gave Abhisar a plain coat so he could be a ‘blank canvas’ for the powder. Like most of my work, this illustration began as a physical painting. I used Jo Sonja artist acrylics on a piece of MDF (Medium Density Fiberboard). The resulting work is what I consider to be a painted draft. Concept artwork, if you will.

I photographed this draft and loaded it onto my MacBook. Next, I used a photo editor to paint new elements and change others. If you look at my progress shots, you’ll notice a great difference between my acrylic painting (number 3 in the montage) and the final work (number 6). Most of my computer work consists of adding dimension, evening out tones, and making colors pop. 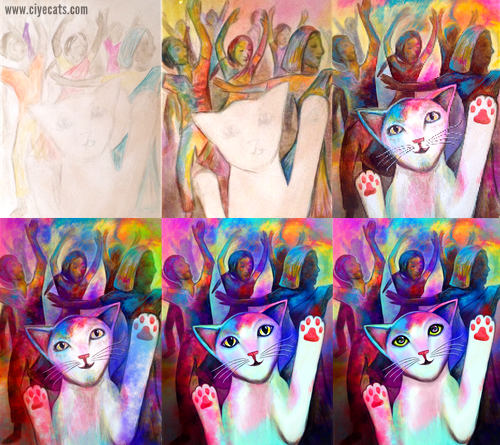 I googled a bunch of Indian names, and from what I understand, ‘Abhisar’ means ‘companion.’ I could be wrong though, for I also found an article that said Abhisar means ‘heading towards.’ Either way, they both seem appropriate for a worldly feline.

Perhaps someone who speaks Hindi could help me out?