Time for another OOAK Cat spotlight! Today I wanted to do one on the Hippy cats from the book.

The year is 1969, and a movement of love and liberation is sweeping across the USA. Eastern philosophy, tie-dye clothing, and peace messages are everywhere. New ideas are springing up like neon-colored daisies.

A young musician is heading to a festival called Woodstock. In his kombi van are his belongings, his instruments, and his two beloved cats: Ralston and Halston. Together, he and his feline BFFs are going to form a musical trio…

INSPIRATIONS BEHIND THE PAINTING

When I was a child, I saw a hippy exhibit at a local museum. I remember seeing a kombi van that was covered in ricky ticky stickers. There was an old man standing next to it, and he asked me what I thought of the van. I told him that it was like a “skeleton from Jurassic Park. It’s so… I dunno, it looks ancient!” The old man seemed a bit crestfallen, and I guess my comment made him feel like a dinosaur. (FYI, I recently discovered this feeling when an eighteen-year-old asked me, “What’s the X-Files? Is it some kind of porno?” Holy Krycek!)

But anyway, back then, hippy culture seemed so… “I dunno… ancient!” Yet, now that I’m an adult, there’s something about that movement that fascinates me. Perhaps it’s the psychedelic colors. Perhaps it’s the reckless abandon. Maybe it’s the way that folks romanticize hippies and their notions of love and freedom. 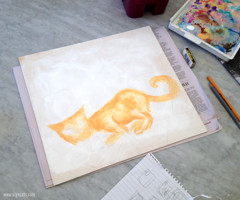 I like to fly by the seat of my pants, so I don’t usually spend too much time planning. I like to do a few doodles in a notepad, then draw right onto my board and see what happens next. The upside of this is the fact that great ideas can emerge out of nowhere; the downside is that I often end up repainting the same board multiple times. 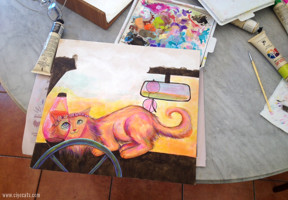 Originally I wanted to have a lava lamp on the dashboard, but it wound up looking stupid. Nonetheless, I’ve included a snapshot of what the lamp was like. I had the orange cat positioned behind the glass, which explains why his right eye is ginormous. I went on to repaint the cat and added lots of headbands.

The two cats are full of green, blue, purple, and red strokes. I like to infuse solid colors with rainbow flecks, for I feel that this adds dimension and character. In this case, rainbow shades tie in to the whole psychedelic theme.

As with all my other work, I photographed my draft and added/corrected/rearranged details in a photo-editing program. 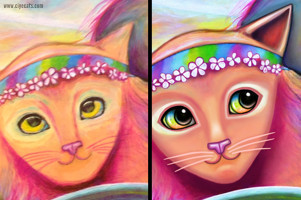 I hope you enjoyed reading this. If there’s anyone else who’s ever felt like a dinosaur, let me know in the comments.