Happy new year! I hope that you’re excited about 2016! But what exactly should you expect this year from your cat? Well, perhaps this guide could be useful. This post covers the first three signs of the zodiac—Aries, Taurus, and Gemini. Each section features a cat from the One-of-a-Kind Cat Book, along with a general forecast. 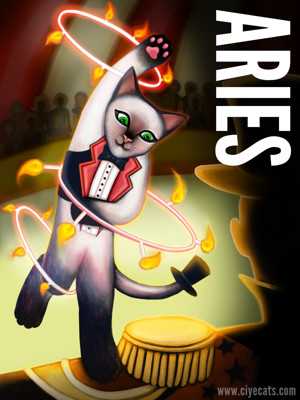 Thea the cat is one half of the Firetwin Circus. Together with her human friend Ayden, she has entertained audiences all around the world. She is famous for twirling flaming hoops. Lots of them.

Thea is a typical Aries. She has boundless energy, along with an inner fire that no one can put out. She seeks out adventures and loves to be the first performer to do a new trick. Whenever she enters the red-and-white tent, a change passes through the air. It’s as if someone has struck a large, invisible match: magic appears from out of nowhere, interest is sparked in the crowd, and within moments, excitement flares up everywhere…

Need I mention that she’s not afraid of danger?

2016 will be an intense year for your Aries cat. You’ve probably gotten used to your fiery kitty’s active personality—but beware, you haven’t seen nothing yet! This year marks a new chapter in your cat’s adventures, and nothing will frustrate him or her more than a boring home. Stock up on new toys, organize kitty play dates, and plan some fun trips. Just remember to use a cat-leash when you go camping. Wanderlust could lead your Aries cat far into the bushes! 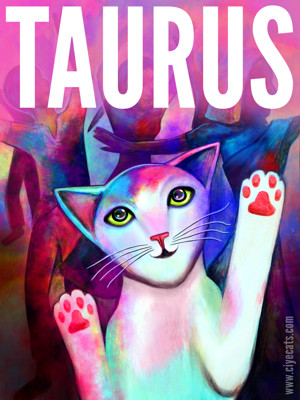 Abhisar is a white cat who lives in India. He is the companion of a young American backpacker named Chelsea. Together, he and Chelsea have been exploring the holy city of Varanasi.

Taurus is an earth sign, and such folks love to keep their paws firmly on the ground. Abhisar is no exception. He like to wander the countryside and hates to be rushed. This easy-going cat appreciates beauty and wonder; some of his favorite things include the Holi festival, the temples of Varanasi, and the local frangipanis.

Abhisar is a loyal and reliable guide. He radiates comfort and stability, and his companionship is a wonderful gift.

You may have noticed that your Taurus cat was in a bit of a slump in 2015—lots of lethargic moments, listless moping, and overnapping (even for a cat). Thankfully, this year is a shot in the arm for your Taurus cat. And the name of this shot? Love.

In 2016, Love is all around the Taurus cat. New friends, humans, and perhaps even (friendly) dogs will enter your cat’s life. And all of these experiences will bring out the Taurus cat’s affectionate nature.

A pair of Gemini cats: 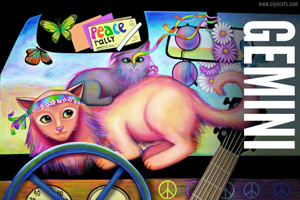 Halston and Ralston are brothers from the same litter. One might be smaller than the other, but they both share the same Gemini energy. These twins are sprightly, multi-faceted, and ready for anything. They are endlessly chatty, and it’s not uncommon to find them meowing away into the wee hours—much to Owen’s frustration.

They have a strange ability to communicate with humans. Even though they only use meows, purrs, and caterwauls, somehow they always manage to ‘get their point across.’ Like all Geminis, they can start a conversation with practically anyone.

New sights, sounds, and ideas are a source of delight to these cats. They looooove improvising, which is why they enjoy free-styling with Owen.

2016 will be a busy year for your Gemini cat. But that’s okay. By now you should be used to your cat’s whirlwind presence. He or she is always up to something or ready to push over something (a nice vase, perhaps?), and this year is no exception.

New opportunities might not be plentiful, but there’s no reason why you and your kitty can’t will them into existence. Want to turn your cat into a Youtube star? This could be the year for some time in the spotlight. (FYI: Lil Bub is a Gemini )

There could also be a new addition to your family, so a shelter visit could yield a new sibling for your Gemini cat. But don’t worry. Everyone should adjust in no time.

STAY TUNED for Part 2 (Cancer, Leo, Libra). And let me know your thoughts on kitty astrology!